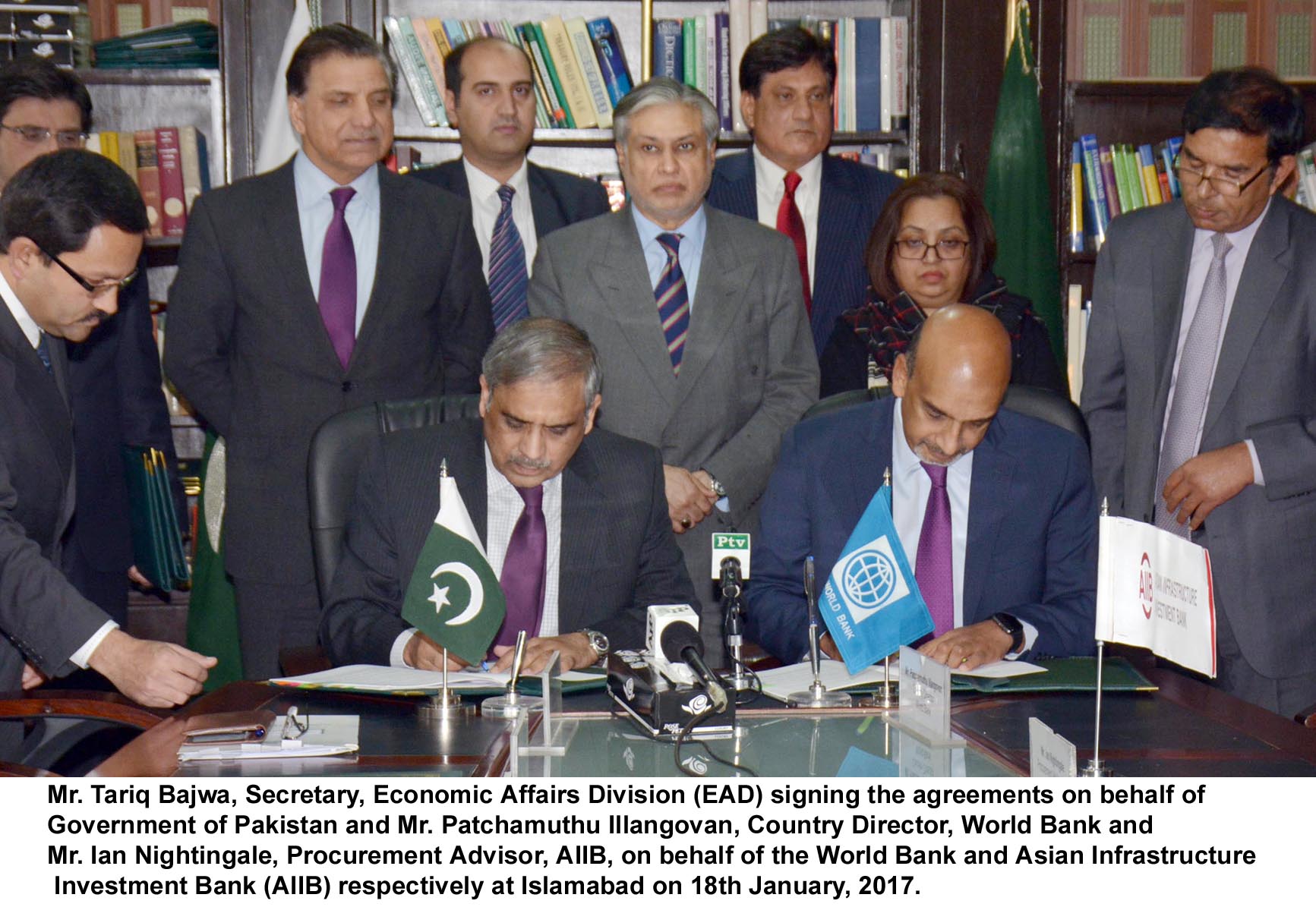 Finance Minister, Senator Mohammad Ishaq Dar witnessed the signing ceremony of agreements worth US$ 720 million with the World Bank and Asian Infrastructure Investment Bank (AIIB) held today in his Office to support projects in Hydropower and Governance and Policy sectors.

On this occasion, the Finance Minister thanked the World Bank and Asian Infrastructure Investment Bank (AIIB) for extending their continuous support to the present Government in its efforts to achieve the sustainable economic development of the country. He said that the present Government is focused on economic growth and is making huge investments in energy, infrastructure and social protection. He said that the results of measures taken by the government are already visible. The Minister said that due to these efforts, the government has succeeded in overcoming the energy shortage to a large extent resultantly the load shedding duration has been curtailed for the domestic consumers while uninterrupted supply is being provided to the industries. The Minister also said that keeping in view the future demands on account of greater economic activity; the government is enhancing the production capacity of electricity to cater for the future needs as well.

The projects signed today are:

Tarbela-5th Extension Hydro Power Project (1410 MW) IBRD Credit of US$ 390 Million and AIIB US$ 300 million: The objective of the Project is to facilitate a sustainable expansion of Pakistan’s electricity generation capacity by installation of three additional power generating units having installed capacity of 470 MW each (total 1410MW) on existing Tunnel-5 without affecting the capacity for irrigation release. The total installed capacity of Tarbela Dam after completion of 5th Extension will rise to 6298 MW.

The total cost of the project is US$ 823.5 million.  The World Bank (WB) will finance US$ 390.0 million and Asian Infrastructure Investment Bank (AIIB) will contribute US$ 300.0 million and the remaining US$ 133.5 million will be funded by funded by WAPDA (US$ 124.5 million) and National Transmission and Despatch Company (NTDC) (US$ 9.0 million) for additional Transmission line from Tarbela to evacuate additional power.

The project would help in further development of Pakistan’s hydropower potential along the Indus River Cascade which is a cornerstone of the World Bank Strategy and Government’s energy policy to reduce load-shedding, reduce cost of electricity production, and improve financial sustainability of the power sector.

Tarbela-5th Extension Hydro Power Project would continue to support a number of community schemes initiated by WAPDA for communities of the area under Tarbela-4 Extension.

(i)      Strengthen the capacity for Sales Tax on Services collection, and improve Accountability in Public Financial Management and Public Service Delivery in the Education and Irrigation Sectors in Balochistan.

(ii)      Increase transparency and effectiveness in public resource management and strengthen accountability of Public Service Delivery in the Agriculture Sector of FATA.