H.E. Nawaf bin Said Al-Malki, Ambassador of the Kingdom of Saudi Arabia to Pakistan calls on the Federal Minister for Economic Affair, Sardar Ayaz Sadiq in his office on 8th September, 2022. 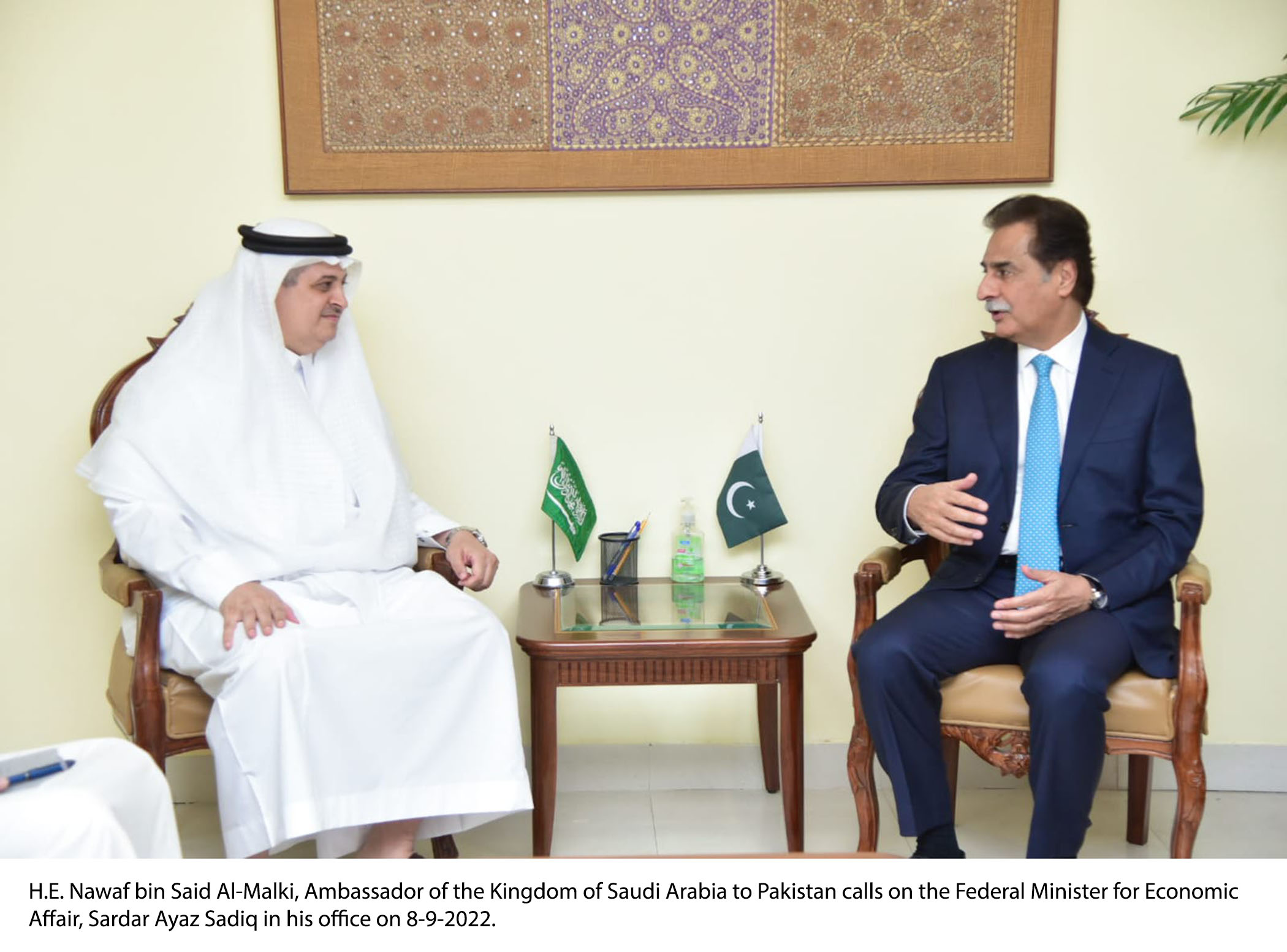 Said Al-Malki, Ambassador of the Kingdom of Saudi Arabia to Pakistan calls on the Federal Minister for Economic Affair, Sardar Ayaz Sadiq in his office today.

Sardar Ayaz Sadiq, the Federal Minister for Economic Affairs welcomed the Ambassador of the Kingdom of Saudi Arabia, H.E. Nawaf bin Said Al-Malki in his office today. Matters of mutual interest were discussed in the meeting.

Minister for Economic Affairs stated that the relations between Pakistan and Saudi Arabia are rooted in the centuries old religious, cultural and commercial ties and are based on shared Islamic ideals.

While speaking on the occasion, the Ambassador stated, “We have a special place for the people of Pakistan in our hearts.” He further stated that Pakistan has immense potential in terms of its capable human resource, textile sector, scenic beauty and hospitality. The Ambassador stressed on the need to highlight strengths of the country globally to attract more investments and tourism as well.

Minister appreciated the fondness of the Ambassador for Pakistan and stated that the relationship between both nations can be strengthened by increasing mutual cooperation. He further apprised the Ambassador about the current devastating situation of flood in the country and stated that regular meetings are being conducted by the honorable Prime Minister of Pakistan to monitor the flood situation.

He apprised the Ambassador about the collaboration with the donors on flood and stated that damage need assessment report will be ready in coming weeks that will give us a complete picture of the damage caused by the unprecedented rains and flash floods.

Furthermore, Minister stressed on the completion of two Saudi sponsored projects in Islamabad namely; Construction of King Salman Hospital at Tarlai and Establishment of F. G. College of Home Economics, Management Sciences and Specialized Disciplines. He also expressed his desire to meet the Saudi Minister for Economic Affairs to strengthen the relationship.

Speaking on the occasion, the Secretary Economic Affairs also stressed on boosting the relationship between both nations. He stated that currently due to flood situation, Pakistan is in the relief phase for which there is immediate requirement of tents, blankets, mosquito nets, food packs, medical assistance etc. For which, the Government of Pakistan has requested both bilateral and development partners for help with the relief effort. He further expressed gratitude to the Saudi Government for providing gracious assistance during our difficult times and stressed on enhancing the assistance.

Concluding, Minister for Economic Affairs expressed gratitude to the Ambassador for expressing immense love for Pakistan and ensured to enhance the brotherly relations between both nations.