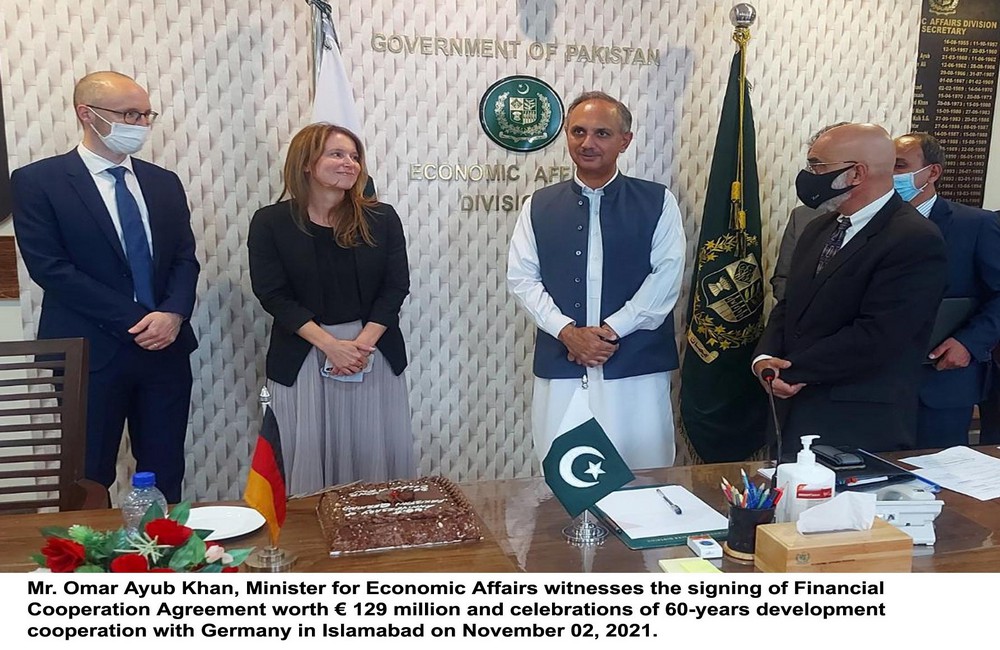 Mr. Omar Ayub Khan, Federal Minister for Economic Affairs witnessed the signing of Financial Cooperation Agreement amounting to € 129 Million between the Ministry of Economic Affairs, Pakistan and Federal Ministry for Economic Cooperation & Development, Germany. The Minister appreciated German’s enhanced bilateral economic cooperation with Pakistan. The Minister expressed that Pakistan and Germany are long-standing development partners and congratulated the both side on completing 60-years of development cooperation. The biennial Negotiations on Development Cooperation between the Government of the Islamic Republic of Pakistan and the Government of the Federal Republic of Germany were also held in the Economic Affairs Division, Islamabad. The Pakistani Delegation was headed by Mian Asad Hayaud Din, Secretary, Economic Affairs Division and included representatives of the Ministry of Foreign Affairs, Ministry of Finance, Federal Board of Revenue and relevant provincial governments. The Delegation of the Federal Republic of Germany was headed by Ms. Gisela Hammerschmidt, Commissioner for Asia at the Federal Ministry for Economic Cooperation & Development and included participants from the German Foreign Office, KfW, GIZ and BGR. The two sides took stock of the existing Development Cooperation and expressed satisfaction at the trajectory of cooperation in different areas since 1961. As a result of the Negotiations, Germany committed € 129 Million for future German Development Cooperation in Pakistan in addition to the on-going portfolio. During the current talks, both sides underlined the importance of close cooperation and partnership. The German Federal Ministry for Economic Cooperation & Development committed new funding in three sectors --- Good Governance, Climate & Energy and Training & Sustainable Growth. The new financing will be allocated to different projects including Digital Governance Pakistan, Social Protection, Promotion of Startups in Pakistan, Promotion of Solar Energy, Self Employment of Women in Private Health Sector, and Development of Hydropower & Renewable Energy. The Pakistani Delegation briefed the German counterparts about the ongoing policy reforms & initiatives and future development priorities of the Government, which include a stronger focus on transparency, institutional reforms, poverty alleviation & social protection, human resource development, climate change and green energy. Both sides also exchanged views on increasing the cost effectiveness of development assistance initiatives and the measures to enhance cooperation with the private sector. The Pakistani side extended an invitation to the German Delegation to visit Pakistan in the near future, which was accepted by the German side. The Minister for Economic Affairs reaffirmed its appreciation for the strategic bilateral cooperation with Germany. While acknowledging the formidable socioeconomic security and governance challenges it faces, he reiterated its commitment to transform these into opportunities and building upon them for the benefit of the nation.
*-*-*-*-*-*-*-*-*-*