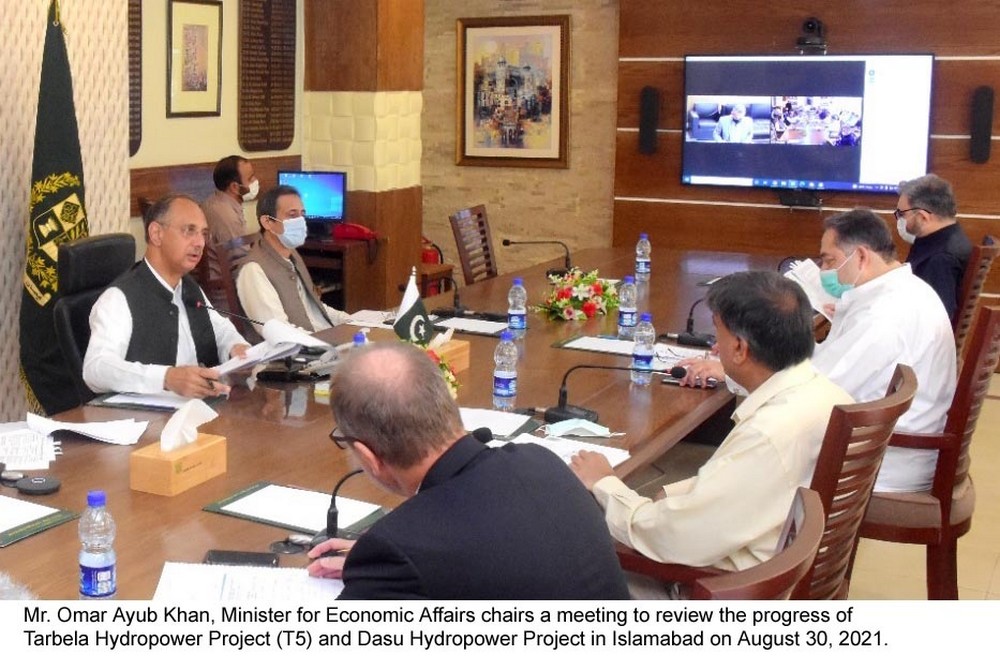 Mr. Omar Ayub Khan, Federal Minister for Economic Affairs chaired a high-level meeting to review the progress of Tarbela Hydropower Project (T5), Dasu Hydropower Project and Dasu-Mansehra-Islamabad Transmission Line. The meeting was attended by senior officials of Ministry of Water Resources, WAPDA & NTDC and Project Directors. Under 5th extension of Tarbela Hydropower Project, the power generation capacity of Tarbela Dam will be enhanced by 1410 MW. The World Bank has provided US$ 390 million for 5th extension of Tarbela Hydropower Project while Asian Infrastructure Investment Bank (AIIB) has also committed to provide US$ 300 million for this project. The Member, Water & Power Development Authority (WAPDA) informed that contractors have been mobilized on the project site and the construction activities are picking up. Minister for Economic Affairs expressed that timely completion of Tarbela Hydropower Project would help to meet rapidly increasing demand of electricity in the country and improve energy-mix by increasing the share of clean energy. He directed to resolve all the pending issues and expedite implementation to ensure timely completion of the project. The Minister highlighted that local people have suffered a lot due to land acquisition for construction of dam in 1960s & 1970s. He instructed the project authorities to provide more job opportunities to local people, especially affectees of Tarbela Dam, as per project & contract agreements. The Minister further directed to review the performance of already completed community development schemes. The Minister also emphasized that community development schemes must be prepared in consultation with local communities to address the genuine needs. While reviewing the progress of Dasu Hypdropower Project, Minister emphasized on resuming all the development activities and directed to accelerate the project implementation to ensure timely completion of the project. He expressed that revamping & augmentation of power transmission system is critical to ensure smooth and efficient evacuation and supply of power. The Minister further directed the relevant authorities to identify the critical path and set timelines for expeditious implementation of all the foreign-funded projects.
*-*-*-*-*-*-*-*-*-*-*-*