Joint Statement of the 8th Session of Pakistan-Russia Inter-Governmental Commission on Trade, Economic, Scientific and Technical Cooperation was held on January 18-20, 2023 in Islamabad. 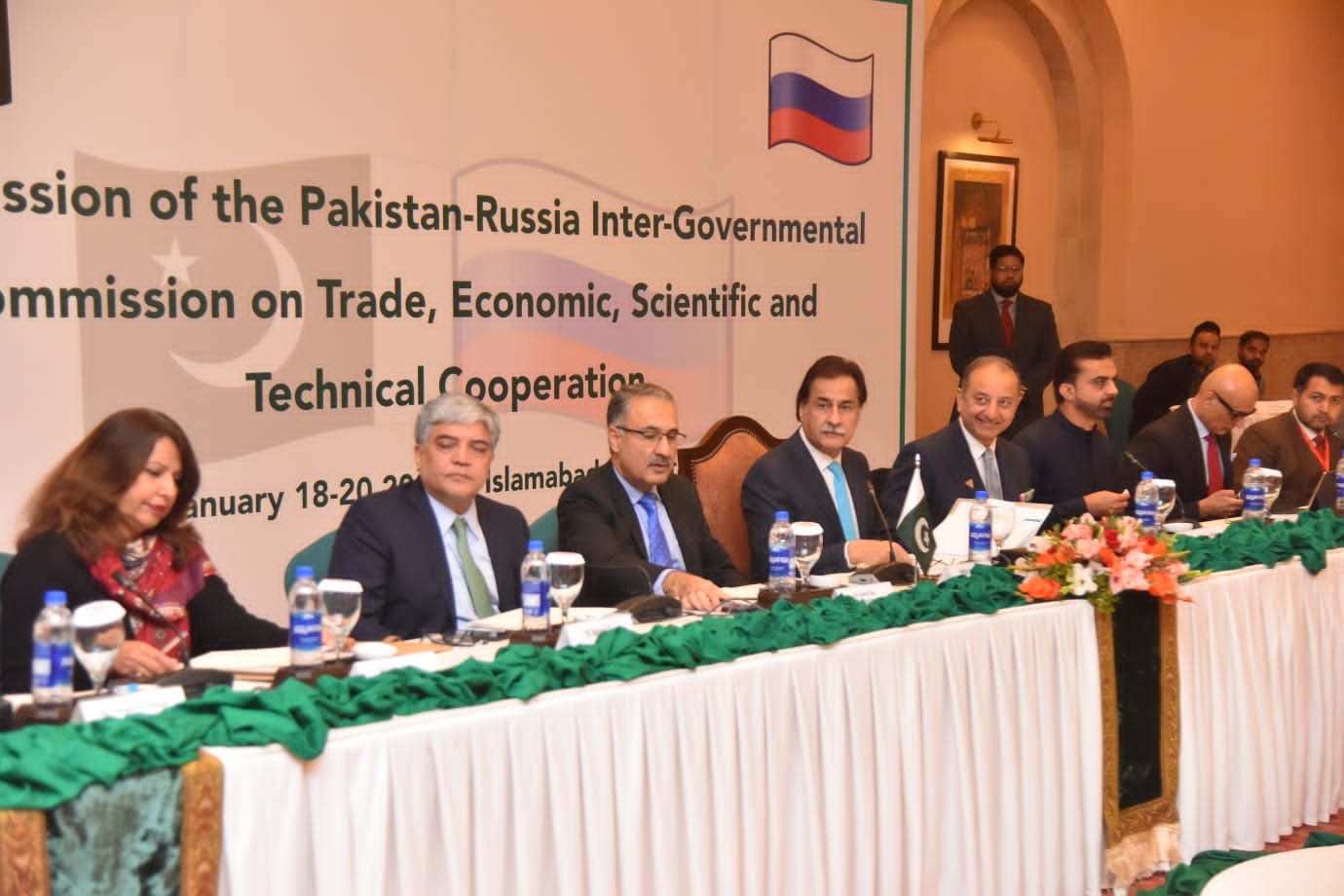 The Eighth Session of the Pakistan-Russia Inter-Governmental Commission on Trade, Economic, Scientific and Technical Cooperation (IGC) was held on January 18-20, 2023 in Islamabad. It was led by Mr. Nikolay Shulginov, Minister of Energy for the Russian Federation and myself Mr Ayaz Sadiq, Federal Minister for Economic Affairs of Pakistan. Senior level delegates, including Ministers and officials from both sides, also attended the Session.

Working under the express guidance of H.E. Mr. Shahbaz Sharif, Prime Minister of the Islamic Republic of Pakistan and H.E. Mr. Vladimir Putin, President of the Russian Federation, both sides took the opportunity to reaffirm their commitment to a strong and comprehensive economic relationship. They reiterated that such a relationship contributes to the economic well-being of the two countries, as well as the region.
Both sides proceeded from the discussions and decisions of the seventh IGC and carried the process forward, as well as explored additional avenues of cooperation. Both sides agreed to further strengthen and enhance collaboration in the fields of trade and investment, energy, communication and transport, higher education, industry, railways, finance and banking sector, customs, agriculture, science and technology, and information technology. Both sides observed and noted positive prospects for implementable and concrete projects in above-mentioned sectors of economy with a huge potential for the socio-economic development of both countries. The Commission agreed that the relevant ministries and departments from both sides will vigorously follow-up to exploit this potential for common prosperity.

Both sides agreed that after consensus on the technical specifications achieved, the oil and gas trade transaction will be structured in a way it has mutual economic benefit for both countries. The process to be completed within March 2023. Both sides have agreed to strengthen energy cooperation, enhance energy trade and broaden energy infrastructure investment based on strategic and favourable commercial terms. Both sides have agreed to work on a “Comprehensive Plan for Energy Cooperation”, which would form the foundation for future work and is to be finalized in 2023.

Both sides agreed that Pakistan Stream Gas Pipeline Project should be considered in terms of a comprehensive infrastructure which is economically viable for sustainable gas infrastructure development ensuring affordable gas supplies.
Russian side was invited toward potential projects of the federal and provincial governments of Pakistan, including in PPP mode and requested the Russian businessmen to explore these possibilities. Both sides have resolved the pending issues related to exchange of information on certificates of origin of goods with the use of electronic verification system and shall endeavor to finalize the above-mentioned protocols by the end of May 2023. The sides agreed to nominate focal persons from both sides in order to enhance mutual cooperation and discuss issues concerning connectivity and logistics in Central and South Asia. The sides also agreed to take necessary measures to increase bilateral cooperation in science, technology and higher education especially academic linkages, collaborative and impactful research, training and development and learning, and enhanced interest of Pakistani citizens in education in the Russian Federation.

The two sides also discussed innovative ways of doing business, including through barter and agreed to explore the option further. In the context of the desire of both parties to promote regional integration and Eurasian connectivity, the two sides agreed to share information towards developing and improving rail and road infrastructure.
The following documents were also signed during the session:

i.    Agreement regarding Cooperation and mutual assistance in Custom matters between the Government of the Russian Federation & the Islamic Republic of Pakistan.

ii.    Protocol on exchange of document and data on Customs value of goods transported between the Russian Federation and the Islamic Republic of Pakistan.